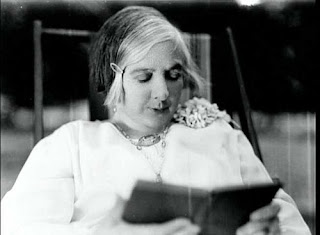 What more can be said about Hannah that has not been by Historians and enthusiasts alike? Probably not much! Yet in amongst my own admiration of Charlie I seem to always find myself drawn to her. Now of course we all know of Hannah's sad and tragic demise to the unforgiving master that is mental illness. It has been argued that the female line of Charlie's family were prone to this terrible condition. Yet certain enthusiasts and individuals alike have contributed Hannah's to Neurosyphillis which I personally do not subscribe too, I will however say one thing about Hannah on this matter however. If she ever had to do anything for the love of her children to put food in their already starving bellies, what mother wouldn't?

After many years of failed attempts Hannah was finally reunited with her sons in 1921 when she was allowed entry into America and taken out of the mental institutions she had spent so many years of her life. I think here is one of the saddest irony's of Charlie's success! One of the most famous men in the world who often hailed his mother as the origins of his gift, Charlie could not share his joy of his art with his own mother who's mental health left her a shadow of her former self. Hannah often had good days and bad ones, her lowest moments often causing despair for her two devoted sons. How sad also that Hannah probably never knew the level of her own son's success to enjoy it! How ironic that only months later, Charlie would sail to England for a triumphant return to his homeland after nearly ten years away, the very place that both saddened and moulded him.

It has often been suggested that Charlie based so many of his female characters upon his mother; I do believe this is indeed true! I think he saw her as the main female figure in his life and felt her struggle, her character and her tragedy spoke for so many women who had found themselves at the mercy of fate for much of their lives. Victorian life was brutal! Many man, woman and child found themselves the victims of the system and ended their days in the harsh realities of workhouse, poorhouse or worse still,  death house, just like something from the pages of Oliver Twist!

Thank God Hannah was able to save her son's from that! The world would never have known the joy and laughter that its most famous son had to offer.

Newer Post Older Post Home
Subscribe to: Post Comments (Atom)
This blog is dedicated to the greatest South Londoner that ever walked the streets of SE11, Sir Charlie Chaplin KBE! Welcome home Charlie! It's nice to have you back.