Charlie's London will be back with you from Monday 14th October with a new and exclusive post!

I am so sorry for the long delay in writing another post for you. I have been super busy lately with various Charlie and research engagements but now I am free to concentrate on a blog post....well, sort of! 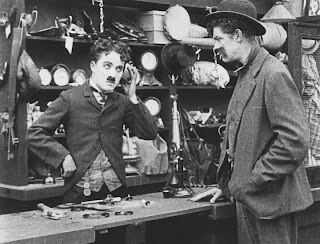 For those of you who do not know, Charlie's London was in the audience for the annual Bristol Silents event that is Slapstick 2013. It was an absolute blast! Lots of fun, films and slapstick moments galore with some very close friends and supporters of Charlie's London. In fact there was very little Chaplin at this festival, ok there was next to no Chaplin at this festival apart from one moment.........

Now all you nice people out here who follow Charlie's London on Facebook will know we have this silly moment on Monday's called Fan Girl Monday. How did it start? Well funnily enough it was Christmas eve, everyone was rushing around and doing the normal pre-Christmas mad moment things when I received a message from a Charlie's London follower who said "Tomorrow is going to be a sad day for a Chaplin fan, should we do something today to make it a bit fun". At first I did not know what to do so I decided to look through the page for signs. Then it hit me! Everyone now and then we descend into Chaplinmania! It is like Beatlemania except with less noise (being the silent era, of course!) and no instruments. It always amuses me when I see comments like "Oh wow! I did not know Charlie was so handsome", so with that in mind the decision was made quite easily. Fan Girl Monday was born......

For any of you unfamiliar with the rules, here goes! Tuesday through to Sunday Charlie's London does what it says on the tin, it posts about Charlie in London or anything related to that. But on Monday everyone can go nuts. We have had Charlie in his bathing suit, Charlie by his swimming pool looking seductive, at the City Lights premiere with Albert Einstein, the infamous Cello picture, the list goes on. Well thanks to the last night of the festival Fan Girl Monday has its next contender because for 30 seconds about 20 minutes into Marion Davies' 1928 film Show People I sat there mesmerised by sight of a certain Mr Chaplin.......

I was really excited by the showing of this film for obvious reasons, yet there were also other elements I was looking for, mostly from the audience. Firstly how many people would recognise Charlie before the title was shown and what would their reaction be? Secondly I was sat with 8 followers of Charlie's London, 5 I knew and 3 I had met for the first time that weekend.  We of course all knew what was coming, My poor partner Kieran (far left in the photo below) knew more than most and just flashed me a knowing smile which I caught out of the corner of my eye just before the musicians struck up for the opening titles.


The whole festival and a review of it will be featured in Silent London very shortly, so keep your eyes peeled. For now I must say goodbye, but stay tuned because this week I will be talking about an amazing play that I recently visited to do with Charlie's early life in London......

See you soon everyone!

An enchanted Charlie Christmas and a Happy Hollywood New Year


I hope you had a fantastic Christmas and enjoyed the festivities of the holidays. I most certainly did, surrounded by my family and friends. Good food, good drink and at times (when I was allowed the remote control) good TV too. Christmas pudding steaming on the hob and Casablanca in the background, it was my kind of afternoon. That is till my brother, the chef of the family, insisted on watching a mad-cap cook. He likes as he cooks giant edible monstrosities out of wacky ingredients and then expects you to do the same...

Thank goodness for my godson. Now anyone who follows the various pages of Charlie's London will know that I speak about Jayden a lot. He is nearly four and the son of my cousin, who in truth is more like my sister. He is my latest Chaplin convert and loves to watch his films with me. He calls him "that naughty Charlie Chaplin" and for Christmas we bought him the Chaplin and Co. DVD which he watched absolutely transfixed. For anyone who does not know this DVD I highly recommend it if you have children, or young adults you want to get into Charlie but may feel silent films at a first glance are too heavy going. It's a French animation produced by the Association Chaplin and Bubbles Inc. in conjunction with Roy Export SAS. It's similar to the Pixar style of animation and for me captures the mannerisms and essence of the little tramp quite well. Jayden watches them so intently and is so familiar with Chaplin films in general that now he can even watch them and make the connection between the children's adaptation and the original shorts they are meant to represent.


Watching him watch any Chaplin brought me to a subject that I know many Chaplin blogger, Tweeter, Facebooker and Tumblrer (is that a word...) has thought long and hard about over the festive period.

Of course, if you are a Chaplin fan, Christmas is often a strange time of year. Christmas Day, 1977 saw the end of an era with the passing of not only a comedy genius but arguably one of the fathers of contemporary cinema. Writing as much as I do about Charlie made me realise that somehow, on the day when everyone would be relaxing and celebrating, I would have to mark it with something of a sombre nature. So how was I to do it?

Talking one afternoon to one of my close blogging / Facebook friends, Anne  threw up an interesting situation and for me. I am one of the youngest bloggers on the subject that I know.  In a time when so many other great internet contributors have written very touching posts because they remember Charlie's passing, I cannot. I was born 5 years after he died and don't have those memories to draw from. I also try to keep my blog focused on London as much as I can - and of course, he didn't die here.

It was then suggested to me that I should write a post on the Christmas' he had in London such as his sad moment in Hanwell, or waking hungry on Christmas morning because there was not even an ounce of food in the house. For those that don't know, as the story goes Charlie stood in line with the other boys at the Hanwell Workhouse for his present of an orange. Oranges were a rare treat and he was excited to have one. However as he stood there, excited and happy he was told by the warden that because he had soiled himself the night before he wasn't allowed one - a memory that haunted him for the rest of his days.

I toyed with the idea but then I realised that this probably would not read very well, especially when this time of the year is meant to be a happy one. I reflected again on the fact that I was not alive when he was, as much as this has always saddened me it finally flashed the lightbulb above my head which led me to this post.

Charlie for me has never been dead or alive, he has always been a beautiful enigma wrapped up in a world of make believe and pure resilient genius. I did not have to mourn his passing because for me he never had one. I watch Jayden and his love of Charlie's films and I think of my own childhood, sat in very much the same position with my grandmother watching them in the same way. Laughing at the same parts, crying at others. Charlie has always been in my life and will continue to be whether he physically lives or doesn't.

Hindsight in life is such a great gift. I can appreciate the things he was trying to convey to the world without having to read the scandal and the rubbish that many people reported about him to sell newspapers. His art will continue to speak forever and while we hear the infectious laugh of the children who enjoy him now as much as people did in 1915, I think as Chaplin fans we can all sleep easy, knowing that future generations will make sure he lives forever!

Email ThisBlogThis!Share to TwitterShare to FacebookShare to Pinterest
Older Posts Home
Subscribe to: Posts (Atom)
This blog is dedicated to the greatest South Londoner that ever walked the streets of SE11, Sir Charlie Chaplin KBE! Welcome home Charlie! It's nice to have you back.